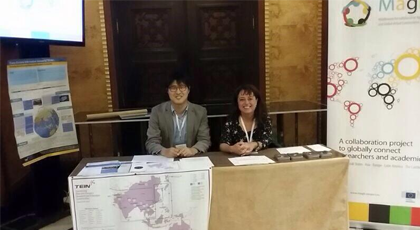 Held in December 7 and 8, 2015, in the Sheraton Casablanca Hotel (Morroco), and organized by ASREN (Arab States Research and Education Network), the e-AGE Conference (Integrating Arab e-infrastructure in a Global Environment) was an excellent scenario to understand the challenges that the Arab NRENs and researchers are facing in order to foster their regional development.

With a stand shared with TEIN*CC where the MAGIC project information and promotional material was distributed and its participation in the Conference third session, entitled as “Evolving Services for Science, Research, and Education Communities”, by means of the presentations “Advanced services for international cooperation: case of VI-SEEM and MAGIC projects” and “MAGIC, a Global Connection Community”, given by Ognjen Prnjat, European and Regional eInfrastructure Manager (GRNet - Greece), and María José López, Communications and Public Relations Manager (Chile - RedCLARA), respectevely, the global collaboration project could share in a face-to-face fashion the importance of the participation of the Arab research and education community in the project.

The MAGIC project wants to thank Mrs. Yasmeen Alkouz and Mr. Yousef Torman for their support and collaboration in making the project’s participation in the event a success.

CASABLANCA --- December 13, 2015 --- Under the royal patronage of His Majesty King Mohammad VI of Morocco, the Fifth International Forum on Integrating Arab Infrastructures in the Global Environment was inaugurated; organized by the Arab States Research and Educational Network (ASREN) and headed by HE Dr. Talal Abu-Ghazaleh.

Holding the Forum coincides the seventh annual conference held by the Arab Organization for Quality Assurance in Education (ARQQA) on quality assurance in education under the title “The Impact of Quality and Accreditation in Education”.

Both the Forum and the Conference were held in the presence of the Minister of Education and Higher Education in Palestine, the EU’s Delegation Ambassador to Morocco, Assistant Secretary General of the League of Arab States, representatives of international organizations and education institutions and more than two hundred participants from thirty countries.

As a Chairman of the two organizations, Dr. Abu-Ghazaleh thanked His Majesty King Mohammad VI for his generous patronage of the forum and the conference on “Integrating Arab E-infrastructure in the Global Environment and the Quality of Education”. He pointed out that: “This generous patronage from His Majesty constitutes a great support for hosting the activities of research, education and e-infrastructure networks for the Arab region as a whole”. He also thanked the EU, the Arab League and the representatives of the Arab governments and the educational and research institutions for their support to enhance and boost the scientific research in the Arab countries to the highest level.

He thanked as well HE Robert Joey, the Head of the EU’s Delegation to Morocco, for his participation in the conference. He sees that “such participation reflects the great support to our work in developing the research networks for the Arab region as a whole”. In addition, he thanked Minister of Higher Education and Scientific Research in Palestine HE D. Sabri Saidam, all the delegations from Egypt, Tunis, Lebanon, Algeria, Somalia, Sudan, Iraq, the UAE and Mauritania and “HE Mr. Yaser Abdel Moneim, the Director of Education and Scientific Research in the Arab League – our partners in developing the quality of education, and ASREN”.

He stated: “The two-day meeting involved many activities including the Fifth International Forum of ASREN, the seventh conference of ARQQA, EUMED Event 7, EUMEDCONNECT3, Africa Connect2, a workshop on quality management systems and another workshop on the role of the outstanding leadership in the development and the improvement of the educational institutions.

He stressed that: “the Organization will continue to serve the Arab region in the field of developing the best practices of the national network of research and education”. He referred to that “Africa Connect2 will provide the first international scientific research network that links between Africa scientific research networks since ASREN, WACREN and UbuntuNet are partners with GÉANT in that project."

The international forum is a scientific platform organized by ASREN annually. It aims to promote dialogue between the stakeholders whether they are experts, researchers or decision makers to cooperate in preparing and implementing national and regional e-infrastructure projects and to crystalize education and research issues that basically depend on the important issues of energy, water, environment and others in the Arab region.

Both the forum and the conference aim to raise the awareness on the mechanism of the application of the standards of quality and accreditation in the educational institutions and the developments of the new international standards of different types of education. In addition, both aim to find ways to overcome the challenges that face the application of the quality systems.