In the 2015 version of the UbuntuNet Connect Conference, the MAGIC project had a great visibility by the participation of its members in the Africa Connect2 Visibility meeting, the Sci-GaIA Workshop on Open Science and, of course, at the Conference itself.

Aiming to meet the Eastern and Southern Africa NRENs and their research communities, and to show them the benefits of actively participating in the project or getting its benefits, a delegation of the MAGIC project did participate in the UbuntuNet Connect 2015 Conference , the eigth of its kind and the one that celebrated the 10 year anniversary of one of the MAGIC project regional partners: the UbuntuNet Alliance (regional association of National Research and Education Networks -NRENs- in Africa, primarily in East and Southern Africa). 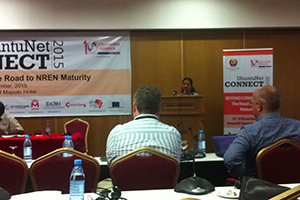 The meetings started in November 17th, with the first face-to-face meeting of the MAGIC Work Package 5 (WP5), that led by Tiwonge Msulira Banda, from UbuntuNet Alliance, works in the building, growth and empowerment of global science communities. Within this meetings the members of the group defined the future course of action and structured the actions that will implement within the upcoming months.

During the evening of the same day, María José López, RedCLARA PR and Communications Manager, and leader of the MAGIC WP6 which is in charge of Dissemination and Training, was invited to participate in the Africa Connect2 Visibility meeting in which she was called to talk about RedCLARA and MAGIC’s experience in dissemination and outreach and new collaboration possibilities in these areas were envisioned in order to promote the South-South collaboration and, more over, to enhance Africa’s participation in MAGIC.

November 18th was the day of MAGIC’s participation in the Sci-GaIA Workshop on Open Science, by means of the presentations gaved by Dr. Ognjen Prnjat, Project Coordinator at GRNET (member of MAGIC), and María José López from RedCLARA. Through his presentation entitled as "VI-SEEM Concertation with International Cooperation Projects" Dr. Prnjat highlighted the synergies between the collaborations project in which his institution is involved, while MAGIC WP6 leader, through her presentation entiteled as “Collaborating to globally connect researchers and academics” went deeper into the project's benefits for the global research communities.

MAGIC and Sci-GaIA, both H2020 financed projects, will look after new sinergies in order to better serve to the scientists research purposes and, of course, to enhance collaboration. 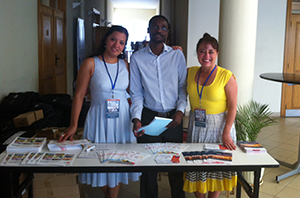 During November 18th and 19th the MAGIC project was an active participant in the reception of the UbuntuNet Connect 2015 Conference,where it distributed project’s brochures and goodies that were very appreciated by the attendees. With a participation of above 200 participants from all the African continent, Europe, Asia-Pacific and Latin-America, MAGIC was introduced to the attendees throughout two presentations. The first one was given by Dr. Ognjen Prnjat, and it was entitled as "VI-SEEM and MAGIC projects. Virtual Research Environment for value-added services in national and regional NRENs: case studies", and the second, “A collaboration project to globally connect researchers and academics” (a summary of the paper prepared by Leandro Guimarães, WP2 leader - RNP, and María José López) was gaved by MAGIC WP6 leader. Both presentations went through each project component highlightening the collaboration possibilities and the benefits that the global research community can take from MAGIC, of course, through different perspectives. The presentations were given during Friday 19th within the International Collaboration in Research session that was chaird by Cathrin Stöver, GÉANT’s International Relations and Communications Manager.

Also within Friday 19th, but during the Special Session on Research, that was chaird by Bonny Khunga, ZAMREN CEO, Tania Altamirano, member of MAGIC’s WP5 and RedCLARA’s Academic Communities Coordinator, gave a presentation about the Colaboratorio platform, that was of main iterest to know by the leaders of the African NRENs.

The experience of the MAGIC project members in UbuntuNet Connect 2015 Conference enriched the project’s collaboration aims by means of the establishment of what we are sure will be a very fruitful relation with the entire African research and education community.